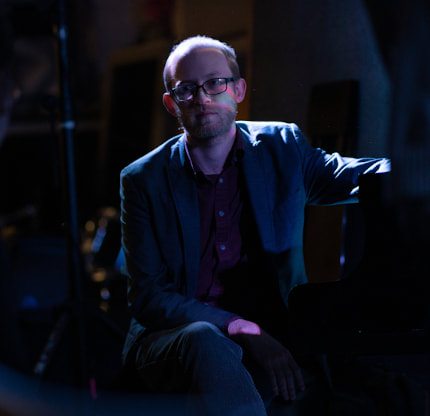 Photo credit: Steve Kaye
Brett Carson is a composer, pianist, improviser, and occasional theater artist based in Oakland CA. His compositional work, which has been described as "fascinatingly intense" (Stephen Smoliar, SF Classical Voice), explores the intersection and juxtaposition of diverse conceptual strata delving into the realms of myth, ritual, and unconscious impulse. Drawing from a plurality of influences, including Sun Ra, Olivier Messiaen, Captain Beefheart, and the literary work of André Breton, Jorge Luis Borges, and J.R.R.Tolkien, he seeks to establish alternative logical systems and cosmologies.

In addition to his compositional work, he has performed as a pianist and keyboardist across the US, Europe, and South America in new music, free improvisation, jazz, and rock contexts. He has been the pianist for the Art Ensemble of Chicago since 2019. Additionally, he has played/recorded with a wide variety of other musicians including Bill Baird, Brian Baumbusch, Nicolas Collins, George Lewis, Roscoe Mitchell (solo projects), Bill Noertker, Rent Romus, and William Winant.

Projects include the jazz/improvisation group Quattuor Elephantis and a mytho-dramatic song cycle "Mysterious Descent", the latter partially written in an invented language "Kôktimo". Recent works for theater include the 2017 premiere of his one act play, "Mary's Dilemma, or That Sinking Feeling," and the 2018 premiere of his experimental chamber opera "Just Visiting (X-Ray Vision)". His newest project "The Killing Jar" is set to release on May 20, 2021.

​"...Carson mixes modern classical music, traditional song form, and old-timey melodrama. It’s all presented with a sense of high drama but there are also touches of silliness and absurdity..."
- wedgeradio.wordpress.com

"Brett Carson’s sonoverse is both multi and meta. You’ve gotten up from a totally normal chair, walked down a totally normal street, and without noticing you’ve ended up circling the nucleus of your own consciousness along six different orbits simultaneously. Blink again, and that same system is now split into twelve uneven parts that are nevertheless identical."
- David Katz, vocalist, composer, and improviser

"Confusing, absurd and occasionally beautiful – like existence itself, and the weird myths we create to explain it."
- Lexi Glass, KFJC